Broken Down and Isolated in Amethyst Fossicking Field South of Cloncurry 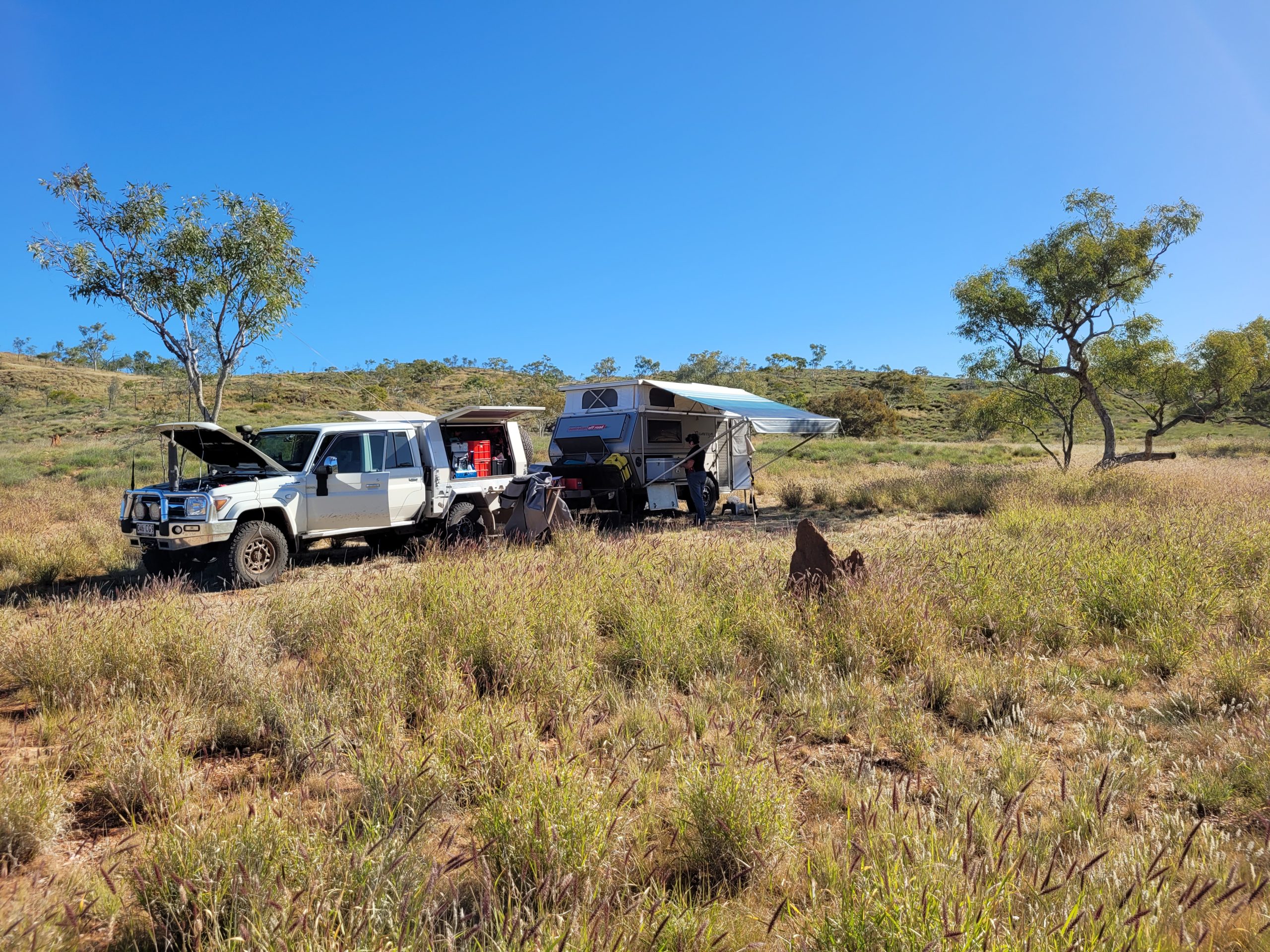 In early June 2022 we departed Brisbane in our new 79 Series Toyota LandCruiser, towing our trusty Quantum off road caravan. After two years of Covid lockdowns we were thoroughly looking forward to getting into the outback and doing some fossicking at some of our favourite spots.

We have been members of VKS-737 for about 18 years and have a Barrett 2050. We enjoyed listening to the skeds and reporting our position and knowing we had the support of the network as we travelled each year throughout the outback in our old Nissan Patrol with a Trayon slide-on camper and for and last seven years, towing our Quantum.

We’ve always been well prepared and we’d never had a breakdown or situation we couldn’t resolve.

When it was time to upgrade our car, we selected a new 79 Series Land Cruiser due to its reliability and because they had less electronics than many other alternatives. A lot of time and money was spent preparing the car. We also carried a Scan Gauge Tool in case there was a vehicle computer issue. 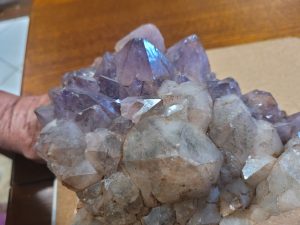 After visiting Boulia we travelled north on the Selwyn Road to the Amethyst fossicking area near Kuridala, about 100 kilometres south of Cloncurry. Driving into the fossicking area mid-afternoon, the last section of approximately eight kilometres required some low range 4WD through dry creek beds and over steep rocky ridges.

We set up camp in a very picturesque location. Even better, we had the place to ourselves and settled down to enjoy happy hour and a beautiful sunset.

Next morning, we jumped into the car to drive to a fossicking location up over the hill. Woops – the car wouldn’t start. The engine turned over but flatly refused to fire up. This new vehicle had only done 6,000 kilometres and we were disappointed to say the least.

Scott is pretty handy, with fifty plus years of working on all types of four-wheel drives. There was a red warning light on the dash and Scott’s Scan Gauge tool showed a PO 335 fault. He was able to clear the code but still the car failed to start. After repeated checks of the engine and wiring it was clear that we had an issue we could not fix (PO 335 is a fault with the Crankshaft Position Sensor).

We were alone and a long way from help with no phone coverage. While there are often other fossickers here, there was no certainty about how long we might have to wait till someone came. We were not in any danger and had plenty of water and food. However, we needed to get help.

We made a Selcall through Alice Springs Base to a VKS-737 operator. Robert responded and handled the situation very professionally. We passed on all our details, GPS coordinates and clues about how to access our location. Robert was able to patch us through to our Daughter in Brisbane so we could keep family informed of our plight. We have been long time RACQ Ultimate members but this was the first time we actually needed to use the service. Robert was able to coordinate a recovery plan with them. Because of the rough track was not possible to get a Tilt Tray all the way in so we would somehow need to be towed out towards the main road.

Robert maintained an hourly call schedule with us, so he could provide an update on recovery status. There were even other VKS-737 subscribers offering suggestions on air. One mentioned pouring cold water onto the crank angle sensor however, the engine was already completely cold from the night before and that didn’t help.

Late that afternoon, a Police car arrived from Cloncurry with RACQ agent Paul (an absolute gem). We assured them we were ok, well provisioned and in no danger. Both men checked the engine, confirmed the fault code and left almost on dark saying they would return the next day. Next morning a four-wheel drive vehicle arrived with Paul and his mate Mr G to tow out our LandCruiser to a point where it could be loaded onto a tilt tray. They would then return for the off-road caravan.

Flat towing the cruiser with no power steering or brake assistance, they needed two attempts at the first steep pinch, with more challenges and careful maneuvering to follow.

Back at the campsite I had to pack up and close down the Caravan, first time I’ve had to achieve this on my own. Duly packed, an hour or so later Scott returned with the others for the van and we all headed out to meet the tilt tray. Mr G had never towed a van before. It was a steep learning curve for him and he handled it well, towing it all the way back to Cloncurry where we set up camp on the grass in Paul’s large block.

Paul arranged for a lovely mechanic friend, Steve who put in a lot of effort on Sunday, visiting us three times, also searching the Toyota website for clues. By now, Steve had confirmed that the Crankshaft Position Sensor was indeed faulty. He’d worked on Toyotas for years and had never seen this sensor fail. His enquiries with various contacts around Australia confirmed their inherent reliability.

Meanwhile, Scott rang the Toyota dealer in Mount Isa, only to be told that they were booked out until the middle of July! The explanation given was that everyone was flat out because of the peak travelling season.

Not happy with that, Scott rang the Toyota National Customer Service line. They were much more helpful; their commitment was that ‘no starts’ received priority over anything else. Consequently, Toyota arranged for our car, the van and us to be transported to Mt Isa without delay. A new crank sensor was air freighted to Mount Isa. Despite Toyota Mount Isa’s initial reluctance, the Landcruiser was back on the road in short order.

Sadly our long awaited five week holiday, going off-road in our beloved outback is a shattered dream, shortened along with frustration and distrust of our new vehicle. However, this predicament clearly demonstrated how valuable HF Radio is when travelling remote areas, particularly when things go south.

Back home in Brisbane, we’re already talking with David Collins from HF Radio Sales (Mount Crosby) with a view towards turning our old 2050 Barrett into a new 4050, complete with new autotune antenna. Yes, there’s the convenience of talking and communicating movements with those who care about us however, faced with a really significant emergency, this could well save our lives.

PS. Grateful thanks to Robert from VKS, the Police, Paul from RACQ Cloncurry, Mr G and Steve the mechanic for all the care and help given to us. Lovely folk out there in Cloncurry!!!! 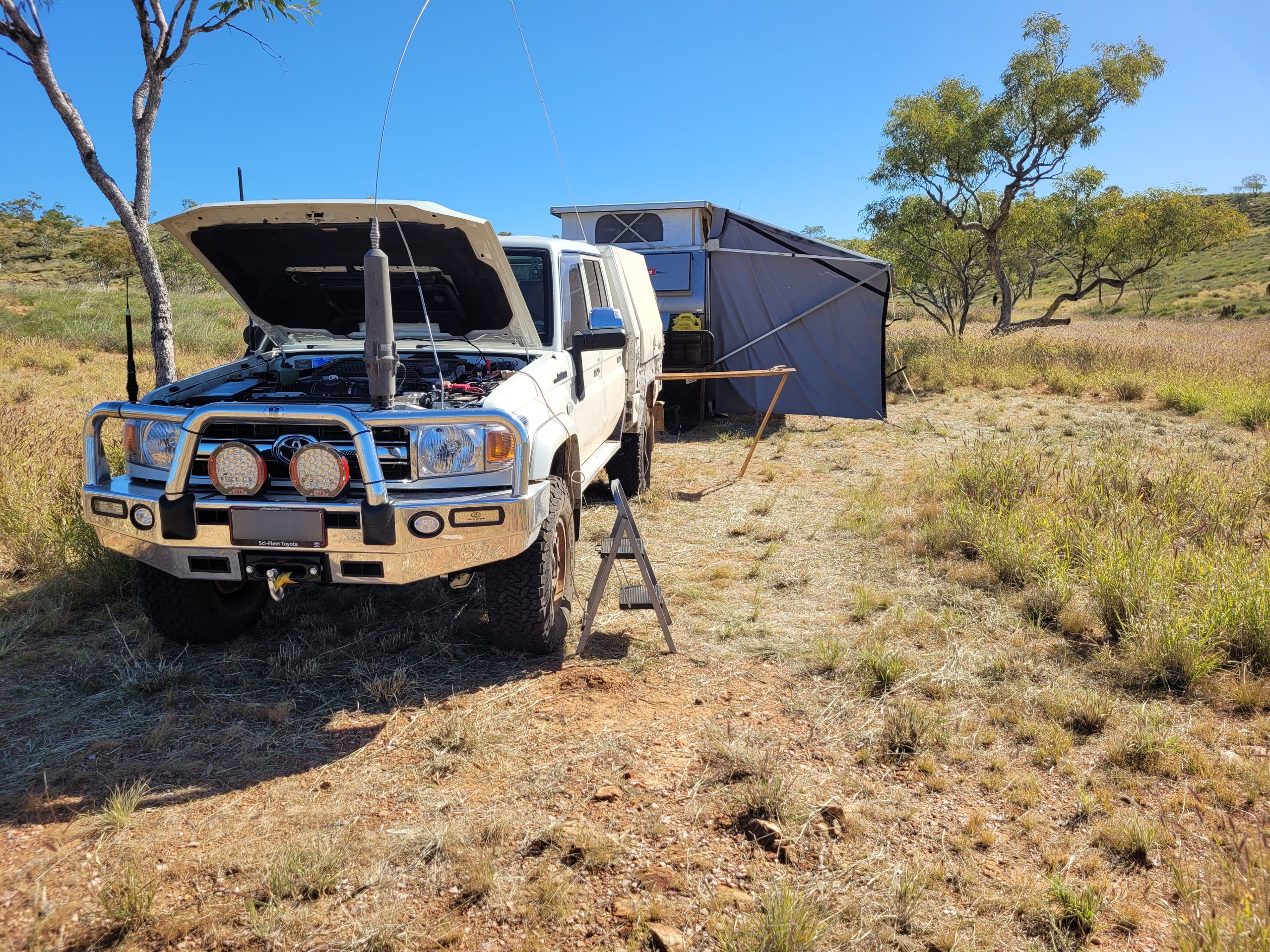