Ken Metcalfe, a Territorian who is a founding member of the Alice Springs Volunteer Bushfire Brigade was presented with one of Australia's prestigious awards, The National Medal for Service, on the 27thFebruary 2006.

The medal was presented to Ken by Alice Springs Mayor Fran Kilgariff in recognition of the 52 years he has been a volunteer fire-fighter in many parts of Australia, including the past 10 in Alice Springs. 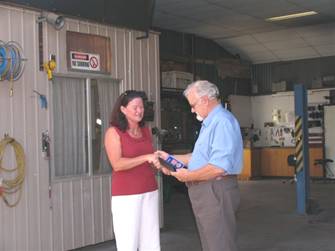 "The community service he has provided around Australia and in the Territory during the past decade makes him a very deserving recipient of the Award."

"Mr Metcalfe has always been eager to pass on his knowledge to others and has helped many new or younger members of the brigade with advice and assistance."

"And while he has stepped back from operational duties in recent times he still operates a radio base from his home where he has a Bushfires NT radio and often assists during callouts." 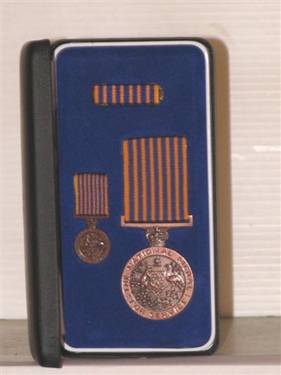 Pictured: The National Medal for Service.

Ken began as a volunteer fire-fighter in 1954 when he joined the Georges Hall Brigade, west of Bankstown on the Georges River in New South Wales as an 18 year old.

He has since been an active member of many volunteer brigades as well as being involved in his capacity as a Park Ranger in many parts of NSW.

Ken was the Deputy Captain of the Heathcote Volunteer Bushfire brigade where he learnt most of his experiences putting out large raging fires coming out of the Royal National Park.

He was also Captain for nine years of the Hollston Nature Reserve within the Hornsby Shire. Since then he has been a member of Fire Brigades during his working life in many parts of Australia.

For the past ten or so  years Ken has operated the combined VKS-737 / Bushfires NT Base Station in Alice Springs.

On behalf of all VKS-737 Network I would like to congratulate Ken on his latest award - Keep up the good work Ken. 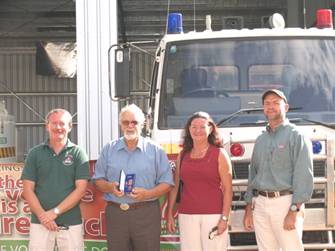