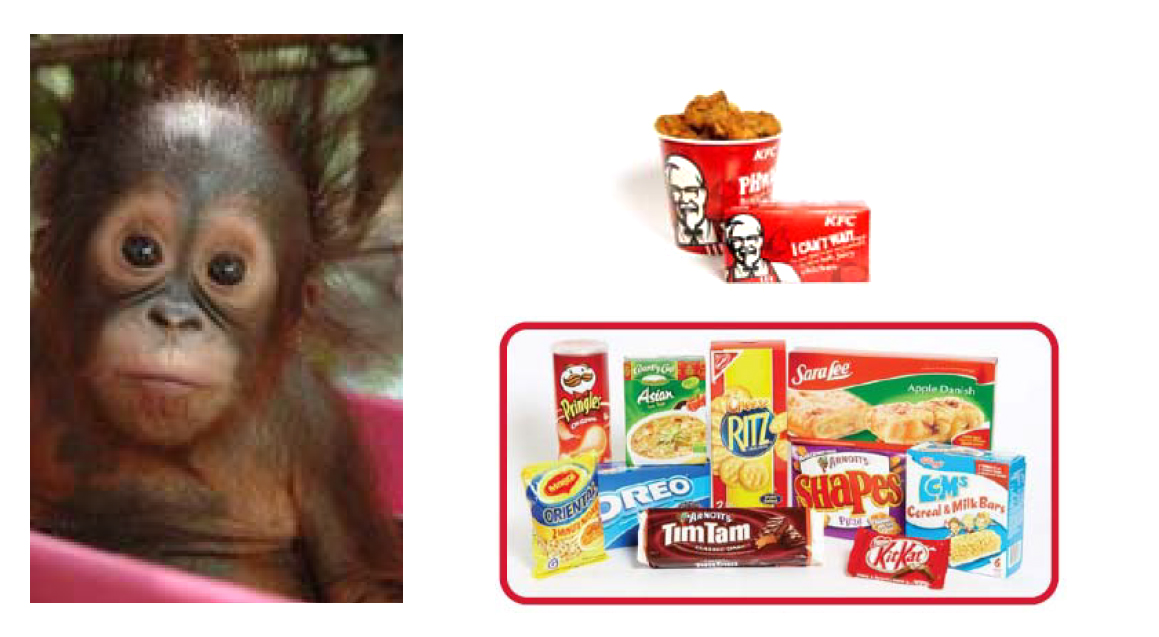 Palm Oil costs the lives of about 50 orangutans every week and its cultivation is a major cause of global warming.

In the time it takes you to read this report another orangutan may have died as a consequence of the rapacious drive by multi-national palm oil companies to get rich regardless of the environmental consequences. Orangutan experts predict that these extraordinary animals will be extinct in the wild within 20 years.
Recent estimates suggest that there are only 45,000 to 69,000 Bornean orangutans and only 7,300 Sumatran orangutans remaining in the wild. At the present rate of killing there will be none left in 20 years. The Palm Oil industry can be held largely accountable for this genocide. They have the blood of thousands of orangutans on their hands.
“If we let one of our closest living relatives go extinct in our lifetime, we will diminish all humanity. The virtual extinction of orangutans in the wild in the next twenty years is a reality!”
Leif Cocks, President, Australian Orangutan Project. 2006

What is Palm Oil?

Palm Oil is the world’s second largest oil crop. It is used extensively in food, body care, and industrial products. Palm Oil is made from the fruit of oil palm trees which are usually planted in large plantations. Malaysia and Indonesia are the world’s largest palm oil producers. Australians consume an average of 10kg of palm oil per person each year.

Environmental Impacts of Palm Oil
An expansion in oil palm plantations is causing massive deforestation and this is the greatest threat to orangutans. They and other endangered species such as the Sumatran rhino and tiger need the rainforest to survive. It is estimated that 80% - 100% of the forests’ birds, mammals and reptiles can not survive in oil palm plantations. We must protect the remaining rainforest habitat.
Palm Oil is a major contributor to Global Warming Wet, swampy rainforests are drained and cleared to make way for oil palm plantations. As they dry, their peat filled soils release large amounts of methane, a greenhouse gas that has a global warming impact 23 times greater than CO2.
The cleared land is highly susceptible to long burning fires that emit large quantities of carbon. Illegally lit peatland fires in Borneo have for years been one of the largest global sources of greenhouse gas emissions. It has recently been calculated that 15% of all carbon dioxide emissions from fossil fuels come from this rainforest destruction.

Social impacts of Palm Oil
The development of new Palm Oil plantations is commonly associated with social conflict and human-rights’ abuses. Most of the area developed is customary land owned by indigenous peoples and local communities. In the name of the 'national interest', communities are being forced to give up land, often against their will and without adequate compensation.
Many Palm Oil companies claim they bring work to the area, but do not always employ the local people. As a result, conflicts between them and local communities are widespread and growing.